Vital Spaces’ Program Director Hannah Yohalem Returns To Santa Fe
​To Help Build the Future of the City’s Arts Community—And Her Own. 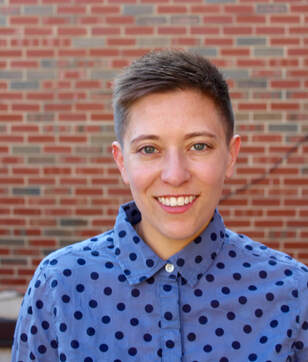 Like many who were born and raised in Santa Fe, Hannah Yohalem was anxious to leave town and explore a wider world when she graduated from high school. By the time she arrived at Harvard University to study the history of art and architecture, she had all but written off New Mexico as a place to build her career after college.

“It’s not that I didn’t want to return,” Yohalem said, “I’ve always loved New Mexico. But I didn’t see many work opportunities here for me.”

After earning her B.A. at Harvard, she moved on to Princeton, where she earned a master’s degree in Art History and Criticism in 2014, then was immediately accepted as a PhD candidate with Princeton’s Arts & Archeology department.

“Back then I had always assumed I would end up working in a big museum,” she said, “but I was starting to realize that the hierarchy there is so narrow and limited.”

After a few years working in internships and fellowships in New York and  Washington D.C., Yohalem left the east coast for Los Angeles in 2018 to work as a field organizer on Katie Hill’s congressional campaign. It was there she started to see the intersecting possibilities of art and politics, which made her think of Santa Fe.
“Santa Fe is a huge arts community, but it’s also the state capitol,” she said. “So I started thinking about the possibilities in that.”

She began looking for opportunities in the Santa Fe arts and non-profit sectors, finding more interesting possibilities than she expected to, then came across the opening for a program director at Vital Spaces—a local arts non-profit focused on creating accessible, affordable spaces and opportunities for growth and collaboration for underrepresented artists, forms, and ideas.

She applied, was offered the job, and moved back to Santa Fe in October 2019.

Now, Yohalem is steeped in exactly the kind of mix of arts and politics that she had been pulled toward back in Los Angeles. She’s meeting with city councilors, collaborating with the City’s economic development team, and working closely with other non-profits to open up space—literally and figuratively—for underrepresented artists in Santa Fe.

“It’s exciting to be working with a very small organization, and with other small and scrappy organizations,” she said. “You have more creative freedom and control to make things happen quickly.”

Yohalem feels she has come full circle from the restlessness that sent her away in search of the mega-metropolitan experience when she graduated high school, though she admits she had to go out and experience those places first before that desire had room to return.

“Santa Fe feels different to me now than it did when I was growing up. It feels younger and more interesting, and more attractive to me than so many other places,” she said. “There’s a lot happening here.”

To her fellow homegrown Santa Fe students who are thinking about where and who they want to be after college, Yohalem recommends reframing the question from who you want to be to what you want to be doing in the world. In a smaller but growing town like Santa Fe, especially when you have existing networks here, creative people can find more open doors and flexible pathways to the things they’re interested in doing than in bigger cities. And she’s careful to note that it’s not about settling or defeat, but about exploring and maturing.

“I think people are sometimes afraid to move home because they think it means they’ve failed. Friends who have moved back say they were worried about that at first, like it meant they couldn’t make it out there on their own. But it’s not like that. It’s about being more honest with yourself about what you truly want.”